See this is what I get for talkin’ shit.  After two very disappointing discoveries about NOISEY’s journalistic practices (three if you count their pathetic Sean Price coverage), I half-jokingly encouraged everyone to boycott the outlet for being the most trifling rap journalists out.  Then they had to go and publish this. 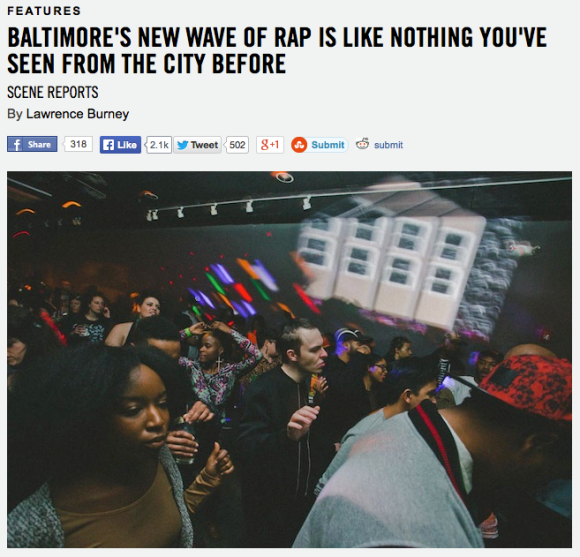 It’s hard to believe that this exists on the same site that recently published a think piece on dudes sexually assaulting Nicki Minaj’s wax likeness at Madame Tussauds.  Mr. Burney, congrats on slipping a supremely solid article past the editors of NOISEY.

Before I read this I could probably name you two Baltimore rappers, and they aren’t recent ones.  Now I’m feeling like they might have one of the best local scenes in the nation and many of these songs have been on heavy rotation since I read this piece.  I won’t steal my man’s shine by reposting all his well-chosen selections here, just know that you’ll find an excellent 2015 reworking of a Tim Trees classic, some cold-ass street rap with very enjoyable pronunciations of the “oo” syllable, and some very tasteful electronica-influenced productions behind some very fresh and innovative rapping.

NOISEY’s previous infractions are still unforgivable, but maybe if we can get enough page views on this kind of solid reportage they’ll allow more of it past their filters.  Keep it up, Lawrence!

5 thoughts on “SCHOOLED BY NOISEY”